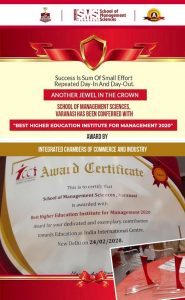 Dr. Amit Kishore Sinha, Associate Professor and Dr. Ram Gopal Gupta, Professor at School of Management Sciences, Varanasi has been awarded with Young Faculty of Year 2020, for his exemplary contribution in area of education at Second National Educational Execellence Conclave by Integrated Chamber of Commerce and Industry New Delhi on February 24, 2020. 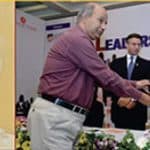 26th October has been a remarkable day for School of Management Sciences Varanasi as institution has been honoured with prestigious award by jury of ASSOCHAM. SMS Varanasi is conferred with ‘ASSOCHAM National Leadership Excellence Award in Higher Education (North)-2018’. Award was given by Her Excellency, the Governor of Jharkhand, Smt. Draupadi Murmu to Prof. P. N. Jha, Director, SMS Varanasi. Program was organized by ASSOCHAM at hotel Chanakya Bnr Ranchi.

Professor Jha congratulated all the stakeholders of SMS Varanasi on receiving such award and said that such recognition by The Associated Chambers of Commerce and Industry of India (ASSOCHAM) motivated our faculty members, Non-Teaching Staff and students for their future assignments. 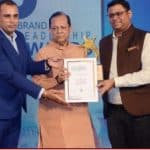 Shri Narayan Sanskritik Chetna Nyaas, NOIDA a social and philanthropic organization of Uttar Pradesh, known for its contribution to the society, conferred Dr. M.P. Singh, Executive Secretary, School of Management Sciences, the leading management and professional education institute, with Edupreneur’s (Educational Entrepreneur) Award for his exceptional service in the field of Higher Education and his contribution towards society by way of providing quality education and career opportunity to students and also providing excellent professionals to the Industry.

A jury comprising of distinguished academicians and industrialists, selected Dr. M.P. Singh for the award for his exceptional contribution in the field of Higher Education. School of Management Sciences was established in Varanasi in 1995, and started Management and Engineering campus at Lucknow in 2008. With its quality in education, Govt. of India’s body NAAC conferred SMS, Varanasi with Grade A in 2017.

Since its inception SMS Varanasi has trained thousands of students, who have made their mark in the industry, as successful professionals. The institute has also produced many entrepreneurs who are doing well and have given jobs to many, some of them conduct campus interview in their alma mater.

ASSOCHAM the knowledge architect of Corporate India having in its fold more than 500 Chambers of Commerce and Trade Associations and serving more than 4.5 lacs Corporate members all over India, has identified and appreciated efforts of stakeholders of SMS Varanasi for their consistent efforts in area of education by providing Best B-School Award. 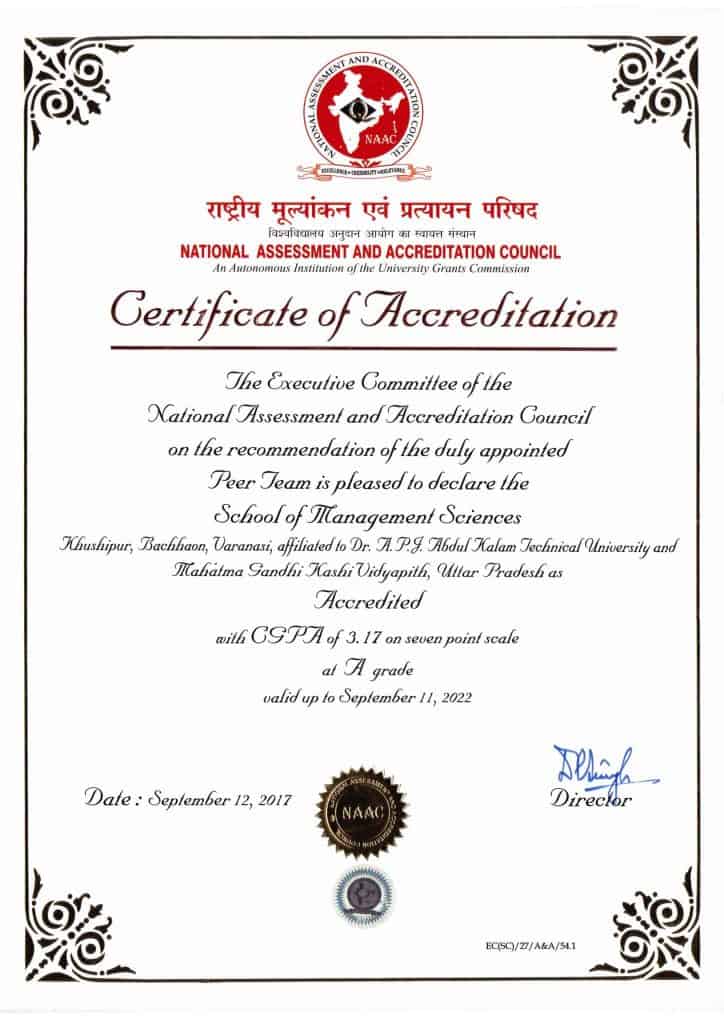 It gives us immense pleasure to announce that SCHOOL OF MANAGEMENT SCIENCES, VARANASI has been accredited with GRADE “A” BY NAAC (National Assessment and Accreditation Council – An Autonomous institution of the University Grants Commission) in the FIRST CYCLE vide notification of The Accreditation Results of institutions approved by the 27th Standing Committee on 12th September 2017.

A three-member peer team from the NAAC had visited the Institute campus on August 21, 22-2017 to assess the Institute based on various categories. The grade was decided during the 27th meeting of the Standing Committee of NAAC on Tuesday and SCHOOL OF MANAGEMENT SCIENCES VARANASI has secured 3.17 Cumulative Grade Point Average (CGPA). Accordingly the A grade has been awarded in the FIRST cycle of the grading. 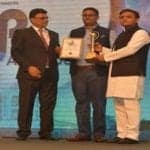 November 9, 2016 was a day of proud to SMS Group of Institutions when Shri Akhilesh Yadav Hon’ble Chief Minister, Government of Uttar Pradesh conferred “Education Leadership Award 2016” to School of Management Sciences, Lucknow. Award ceremony was organized by ABP News at Hotel Taj in Lucknow. The Award was conferred upon the institute’s overall performance and new initiatives in the areas of Academics, Placements, Social Responsibility and industry linkages. 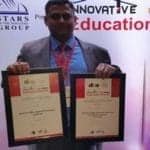 School of Management Sciences, Varanasi was conferred with the “B-School Leadership Award” at 8th Innovation Education Awards ceremony organized by DNA & Stars of the Industry Group at Mumbai on 18th Feb, 2016. Award was received by Mr. Sharad Singh, CEO, SMS Lucknow. Award was presented to Institute on the basis consistent efforts in developing Business Leaders through rigorous academic programs. 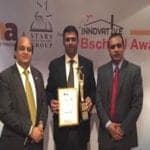 Executive Secreatary of SMS Society Dr. M. P. Singh was honoured with National UP Education and Excellence Awards 2014 for best Edupreneur in the state

Amidst a high-profile gathering of Academicians and Industry people along with honourable ministers at Vivanta, Taj, Lucknow, the Executive Secretary of SMS Society Dr. M. P. Singh was honoured with National UP Education and Excellence Awards 2014 for best Edupreneur in the state in the UP Technical Education Summit 2014 for Excellence through skill development and outcome based Education & Innovation. The programme was supported by the UP Technical University, Lucknow, the AICTE, AIU, NIELIT (DOEACC) Government of India, MSME etc. 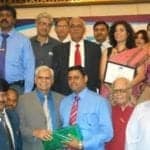 In their effort to identify outstanding individuals and organizations promoting inclusive, leadership based and quality education, SMS Group of Institution is awarded with “B-School Leadership Award 2014” in the 22nd World HRD Congress at Mumbai on 17th Feb 2014. The other award winners in this category include K J Somaya Institute of Buisness Management, Department of Management of IIT Delhi & IIT Roorkee. Event took place in Taj Lands End, Band Stand, Bandra (West), Mumbai.

SMS Undergraduate students had again proved their academic strength by attaining their position in various graduate level programmes (BBA & BCA) affliated with Mahatma Gandhi Kashi Vidyapith (MGKVP). Ankit Verma has grabbed gold medal, as he topped in BCA Programme followed by three other students among top five students of university examinations. On the other hand six BBA students made their place in top ten list of University led by Mona Kabra, who secured Silver Medal in the university examination.

ASSOCHAM Awards School of Management Sciences, Varanasi for being ”The Best Institute in UP for Placement Efforts”

Associated Chambers of Commerce and Industry (ASSOCHAM) and the reputed educational magazine, The Education Post has recently awarded School of Management Sciences, Varanasi for being ”The Best Institute in UP for Placement Efforts” at the event hosted at Ahmedabad. The award was presented by the State Minister for Education for the State of Gujarat on Sunday, November 24, 2013

SMS Varanasi has been been recognised by University Grants Commission (UGC) under Section 12(B) of the UGC Act, 1956 under the head Non-Government Self-Financed institution. This section provides an opportunity to the institution to receive central assistance for all the UGC Schemes related to teachers and students as per the commission of 8th July, 2011. SMS has been placed in this list on basis of its association with Mahatma Gandhi Kashi Vidyapith University (MGKVP), Varanasi and consistent efforts by SMS Varanasi in the area academic excellence.

This is also worth mentioning that SMS Varanasi is already placed under Section 2(f) of UGC Act.

SMS Varanasi has been recognized and awarded at World HRD Congress by “DNA & Stars of Industry Group- Innovation and Leadership Award 2013” on 16th Feb, 2013. The award is in recognition of leadership development, innovation and industry interface of SMS Varanasi team. The award has been earned for the second time by School of Management Sciences on account of hard work and consistent efforts by faculty, staff and management team of SMS, Varanasi in the areas of student development and innovative thought processes.

Two journals from the SMS Varanasi cradle: Management Insight (Established: 2004; ISSN 0973-936X) and Purushartha (Established: 2008; ISSN 0975 024X) have been accepted for hosting on the OJAS (Open Journal Access System) platform of ‘Information & Library Network (INFLIBNET)’ Centre, an autonomous inter-University Centre of the University Grants Commission (UGC). It is one of the rarest achievements in terms of the intellectual capital of the Institution. Out of the eleven journals making it to the final stage from the country, two happen to be from SMS Varanasi.

Complementing the fast track movements of the SMS Group of Institutions (SMSGI) in various endeavors of professional education, teaching, placements, industry-interface, inculcating philanthropic culture etc., the DNA and Stars of the Industry Group has conferred the “Innovation in Building Academic & Industry Interface” to SMSGI and the Awards were presented at a Special function at Taj Lands in Mumbai on February 12, 2011 The award is in recognition of leadership, development, innovation and industry interface of SMSGI. The Group constitutes of School of Management Sciences (SMS) in Varanasi and Lucknow in addition to SMS Institute of Technology in Lucknow. 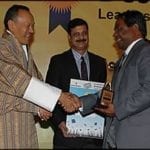 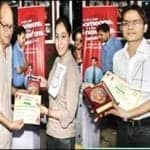 Students of SMS Varanasi, Mr.Naveen Kumar and Mr. Vikas Kumar won the final round of the 6th National Management Quiz (Eastern Zone) organized by All India Management Association. The quiz was organised in two stages, where final stage has six round covering specific subjects.

SMS Undergraduate students had again proved their strength by attaining Gold medals in various graduate level programmes affliated with Purvanchal University. Pallavi thacker has grabbed gold medal, as she topped in BBA Programme and Neha Jain followed the momentum by gaining gold medal in BCA Programme. It is needless to mention that both the students have topped in entire Purvanchal University for the above mentioned programmes.

SMS Group of Institutions received the “Pride of Industry Award” in the launching ceremony of the World Brand Congress Brochure 2009 and the book titled “Building Pride” at Mumbai. 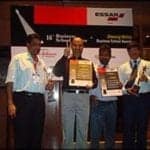 SMS Varanasi was awarded as the best B-School in three categories at the 16th Business School Affaire organized at the 17th Asian Brand Summit held in Mumbai. The award categories included ‘Best Business School for Encouraging Innovations’, ‘Business School Leadership Award’, and ‘Best Academic Input (Syllabus) in Marketing’. Over 1000 B-schools of the country participated in the summit.